As the Cannes Film Festival opens on the French Riviera, fasten your seat belts for a whirlwind ride along the Cote d’Azur.

“Belle! Belle!” a man calls out from a corner café as I round a bend in my 1956 Porsche 356 Speedster. Whether his hoot of approval and accompanying wolf whistle are for me or, more likely, for my rented wheels hardly matters. With the top down and the sunshine of the French Riviera casting a golden glow across the landscape, I’m smiling ear-to-ear either way.

I only hope I’m out of sight when I stall the car on a slope, the gears grinding and growling like an angry grizzly as I try to cajole the temperamental stick shift back into first.

Never mind. I’m going to enjoy my movie star moment, ensconced in a red bucket leather seat as I clear the coast and head into the pine-scented hills.

This is silver screen country, after all, where dozens of seminal films have been shot since the 1950s.

My hired ride from Rent a Classic Car is the same model favored by James Dean, and my hair is pulled back into a wind-defying blonde bun, a la Grace Kelly. All that’s missing from this picture is Cary Grant…and a snazzy score by Henry Mancini to drown out the carnage I’m inflicting on the motor.

Cruising in a vintage car is the perfect complement to my cinematic tour of the Cote d’Azur, which will take me from Cannes to the ridiculously picturesque mountaintop village of Eze, with stops in Antibes, St. Paul de Vence, Nice, and Villefranche-sur-Mer along the way. END_OF_DOCUMENT_TOKEN_TO_BE_REPLACED

An evening spent mingling with the pink-cheeked crowds at festive fairs throughout Europe could transform the most curmudgeonly Scrooge and the greenest of Grinches into stocking-stuffing, carol-crooning converts.

Imagine rustic chalets overflowing with handicrafts that might have been fashioned by elves themselves; historic town squares illuminated by twinkling strands of lights; and local delicacies, from bratwurst to pastries, washed down with mugs of mulled wine.

Here’s a look at five of the best cities to stoke your holiday spirit.

END_OF_DOCUMENT_TOKEN_TO_BE_REPLACED

You’ll find everything you need to furnish your own Little House of Horrors at the Marché aux Puces de Paris-Saint-Ouen.

There may be only one place on the planet where you can find ancient French tapestries, intricately carved African fertility statues, a moth-eaten orangutan and a copy of Barry Manilow’s “Paradise Cafe” (on vinyl, no less). With a selection of antiques even the Smithsonian might envy, France’s Marché aux Puces de Paris/St-Ouen beckons bargain hunters, interior decorators, and the just plain curious.

You know you want it, ladies.

Widely considered to be one of the largest antiques and second-hand markets in the world, the marché embraces more than 1,700 stalls sprawled over 10 hectares in Paris’ 18th arrondissement.

Flea market aficionados flock here to snap up deals on everything from silverplate to crystal balls to 17th-century suits of armor.

Need a medieval crown from the South of France? Chances are, they’ve got that, too.

Even if your expense account doesn’t cover jewel-encrusted headgear, it’s an amusing way to spend an afternoon.

Lose yourself in the labyrinthine alleyways and simply soak up the atmosphere as you browse for deals on some of the strangest stuff to ever clog a closet. END_OF_DOCUMENT_TOKEN_TO_BE_REPLACED

Festive Fizz: Champagne for the Holidays

There’s nothing like the Pavlovian pop of a champagne cork to put you in the holiday spirit. It’s like the starting gun for a season of celebration, from the office Christmas party—where you sneak a kiss with your work crush, emerging from the supplies cupboard peeling sticky notes from unlikely places—to New Year’s Eve, when you slip on your glitziest glad rags and reach for the classiest of accessories: a chilled flute of champers. 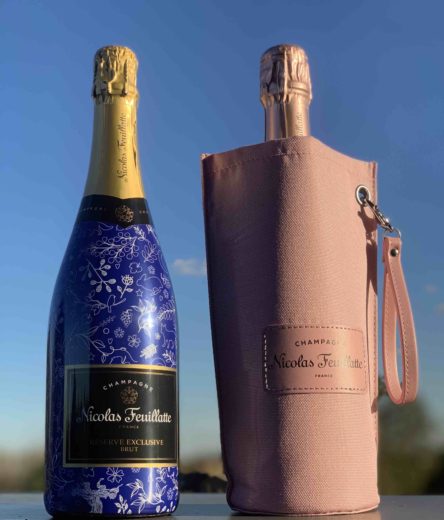 But with supermarket shelves literally overflowing with fizz at this time of year, you might feel a headache coming on simply deciding on a bottle. This year, old St. Nick himself offers a few inspired solutions to your bubble troubles.

I refer not to Santa Claus—although with those red cheeks, I suspect the jolly old elf knows a thing or two about the subject. No, my friends, I speak of Nicolas Feuillatte, the number one best-selling champagne brand in France and third around the world.

Crystal Serenity, viewed from a hillside in Lisbon.

I’m sitting beside a pool in the Bay of Biscay, sipping a gin and tonic as a Thai band plays a vigorous rendition of Van Halen’s “Jump.” A life-sized Barbie in a black-fringed thong bikini has just lowered herself into the water, no doubt inducing heart palpitations and several cases of whiplash among the men relaxing on the Lido Deck loungers around me.

That might seem like sufficient excitement for one afternoon, but all eyes are directed upwards when a crimson-coloured helicopter appears overhead, dangling two black-clad men from cables. For a moment, I wonder whether our ship—Crystal Cruises’ Crystal Serenity—is being commandeered by airborne pirates. But no, these two naval ninjas are deposited aboard the bridge to navigate our vessel up-river to Bordeaux.

You never know what you might see on the Crystal Serenity’s Lido Deck–from Barbie in a fringed bikini to Lisbon’s stunning skyline.

If anyone feared that our days at sea might be, well, a bit too serene, we’ve just discovered that shipboard life is full of the unexpected. Perhaps they should consider rechristening the boat the Crystal Surprise. END_OF_DOCUMENT_TOKEN_TO_BE_REPLACED